“Supporting the interface between science and policy for decision making in disaster risk reduction”.

The 7th APRU-IRIDeS Multi-Hazards Summer School was held on 22-25 July at Tohoku University. More than 60 students and researchers from 11 countries and region (China, Indonesia, Malaysia, New Zealand, Philippines, Singapore, South Korea, Taiwan, Thailand, U.S.A and Japan) participated in the event. They learned the experience from the 2011 Great East Japan Earthquake and Tsunami, the recovery effort in the affected area and discuss the contribution of academia in the implementation of the Sendai Framework for Disaster Risk Reduction (SFDRR).

During the field trip on the Day 3, the participants visited the affected areas such as Arahama Elementary School in Sendai and Onagawa town. 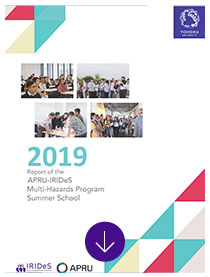 “ Printing and copying are restricted”

Lessons learnt from the 2011 Great East Japan Earthquake and Tsunami