“Towards implementation of New International Framework for Disaster Risk Reduction”

At the opening ceremony, Prof. Susumu Satomi (President of Tohoku University), Dr. Christopher Tremewan (Secretary General of APRU), and Prof. Fumihiko Imamura (Director of IRIDeS) gave the opening remarks. The speakers included the faculty members of IRIDeS, ICHARM, University of California, Davis, and the local government officials of Sendai City and Tagajo City. Moreover, the speakers were invited from the private sector such as Dentsu and Pacific Consultants. At the Group work, the participants discussed the role of academia and universities in implementation of the Sendai Framework for Disaster Risk Reduction.

During the field visit on 23 July, the participants visited Higashimatsushima City and Tagajo City. In Higashimatsushima City, they learned the recovery efforts through the visit of the new Nobiru station and the solar-panel park. In Tagajo City, they walked around the town with the high school students of Tagajo High School to learn their DRR initiatives. They also visited the housing complex newly built for the people affected by the Great East Japan Earthquake and Tsunami. Some of the participants commented that they were very impressed by the initiatives of Tagajo High School that try to pass on their experience and lessons-learnt through the story-telling activity. 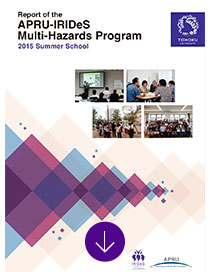 The agenda of the 2015 Summer School:

“ Printing and copying are restricted”