The APRU Multi Hazards (MH) program initiated the campus safety program in 2013. Its major activities include developing the status report of the campus safety of the APRU member universities and organizing the workshop in February 2016 at Tohoku University. It strongly advocates for all the universities to have a disaster/emergency management plan to prepare for future disasters and to conduct regular exercises, drills and simulations. The importance of and need for the disaster preparedness on campus and a disaster management plan was highly recommended in the outcome document of the 1st UNISDR Asia Science and Technology Conference on DRR held in Bangkok on 23-24 August 2016.

The leaflet includes very critical information to strengthen the disaster preparedness capacity on campus and to develop a disaster management plan. The MH program formed a working group that consists of seven universities – Chulalongkorn University, Florida International University, National University of Singapore, Osaka University, Tohoku University, the University of Sydney, and University of the Philippines – to promote the campus safety program. It was distributed at the Asian Ministerial Conference on DRR held in India on 2-5 November 2016 and very well received by the audience. The next step will be to collect the case studies of the campus safety efforts from the APRU member universities including successes and challenges and to learn from others experiences to further enhance the current disaster preparedness capacity. 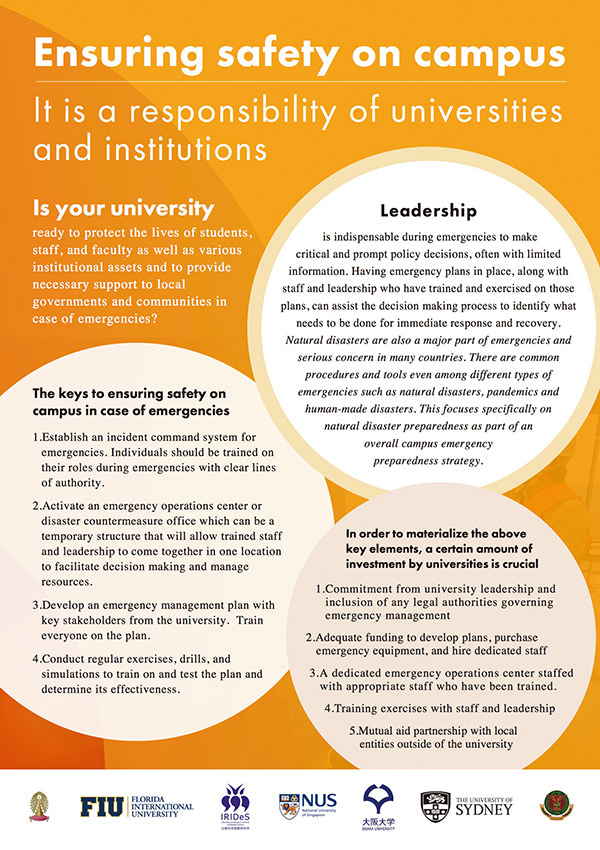